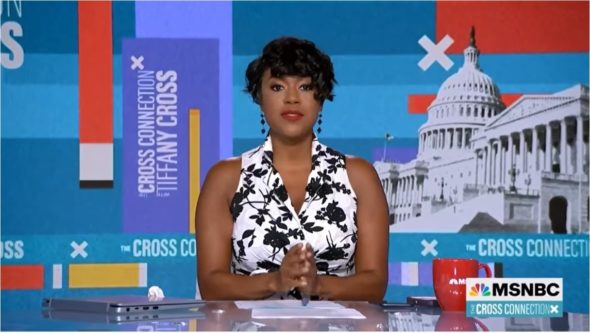 Just days after CNBC announced the cancellation of one news show – The News with Shepard Smith – sister channel MSNBC has cancelled another series – Cross Connection. Tiffany Cross hosted the Saturday news program for the last two years and her contract has not been renewed. Guest anchors will take over the timeslot until a permanent show replacement is found.

Variety revealed the following about the decision to cancel the series:

Her production staff was informed of the decision Friday morning, according to three people familiar with the matter. MSNBC declined to make executives available for comment, and Cross could not be reached for immediate comment.

MSNBC decided not to renew Cross’ contract after two years, according to one of these people, and severed ties with her immediately. A rotating group of anchors will lead her weekend hours until a replacement is found, and the production staff assigned to her show are believed to be likely to stay in place.

Sources say that the relationship between Cross and the cable channel had become frayed recently because executives were “concerned about the anchor’s willingness to address statements made by cable-news hosts on other networks and indulging in commentary executives felt did not meet the standards of MSNBC or NBC News.”

What do you think? Did you watch this MSNBC show? Are you sad to see Cross Connection end?