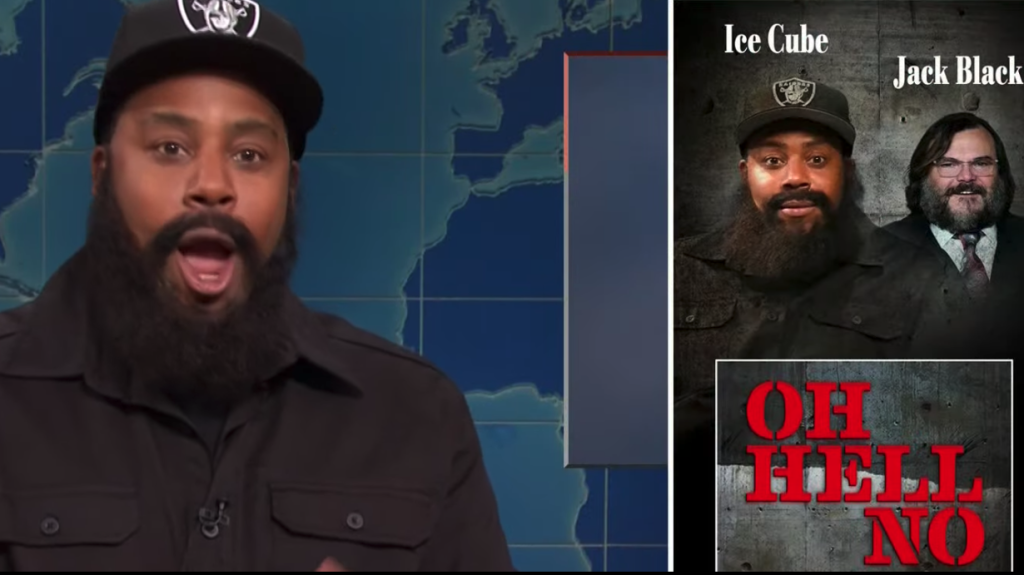 Tonight on SNL, Weekend Update‘s anchors welcomed Ice Cube (Kenan Thompson) to the desk to discuss reports that he’d exited Sony comedy Oh Hell No after declining to get the Covid-19 vaccine.

Cube sported a full beard, noting that he’s going through “a gangster lumberjack phase,” only to have his feet held to the fire by Michael Che.

Why won’t he take the vaccine, the anchor wondered?

“Hey look, man. I’d just rather be myself than take that vaccine, like you other three billion bozos,” said the rapper and actor.

“Yeah, but that’s why you lost this movie,” Che observed.

“Not my loss, your loss. Oh Hell No was going to feature the greatest comedy duo of all time: Ice Cube, Jack Black,” Ice Cube retorted. “The comedy chemistry, man. You know what I’m saying? Try to guess my catchphrase though.”

“That’s actually correct,” said Ice Cube. “But because of this crazy vaccine mandate, y’all ain’t never going to get to hear it.”

That is, Che noted, unless the film’s producers decide to replace him. Ice Cube said that he could never be replaced, but admitted upon questioning that Terry Crews would be “a good choice” to take his place, and that Michael B. Jordan makes “even more” sense.

“The point is, this mandate is costing the world my art. I had a bunch of other projects packed in the pipe. Check it out, bozo,” said Ice Cube. “If you like Barbershop 3: The Next Cut, you would’ve loved the sequel, Barbershop 4: Just A Little Off the Sides. But now we can’t make it.”

Ice Cube also pointed out that he was going to make a prequel to his 1995 comedy Friday, but won’t be able to given vaccine mandates, challenging Che to guess what the new film would be called.

“That’s correct again,” admitted Ice Cube. “I was also going to star in a new M. Night Shyamalan movie called Uh Oh, Twist Comin’. The twist is, there ain’t no twist. Everybody went home, and the day was a good day.”

Che then asked once again why Ice Cube won’t get vaccinated—particularly given that he’s so passionate about the idea of making these movies.

“The better question is, why won’t y’all let me make my favorite project, featuring the greatest dramatic duo of all time—Ice Cube, Meryl Streep,” asked Ice Cube, “eating octopus and traipsing all over Mykonos in Mamma Mia! Cubed?”

The performer also expressed frustration with the impact of vaccine mandates on his ability to run his Big3 basketball league in person. When Che pressed him once again about his refusal to get vaccinated, he said, “Hey bozo, I don’t have to tell anybody about my private medical decisions.”

Tonight was Thompson’s fifth time portraying Ice Cube on SNL. Weekend Update‘s anchors were also joined at one point by Goober The Clown Who Had An Abortion When She Was 23 (Cecily Strong), who appeared to discuss Texas’ abortion law.

News of Cube’s exit from Oh Hell No was first reported on October 29. The film from Bad Trip director Kitao Sakurai follows Sherman (Black), who falls in love with the mother of his friend, Will. The latter, of course, has only one thing to say about that: “Oh hell no.” Ice Cube would have played the role of Will in the feature penned by Scot Armstrong, Tracy Oliver, Jessica Gao and Rodney Rothman, which Matt Tolmach is producing, via his Matt Tolmach Productions banner, with Black and Roz Music. Brittany Morrissey is overseeing the project for Sony. It’s set for release on June 17, 2022

We’ll update this story with video when it comes in.