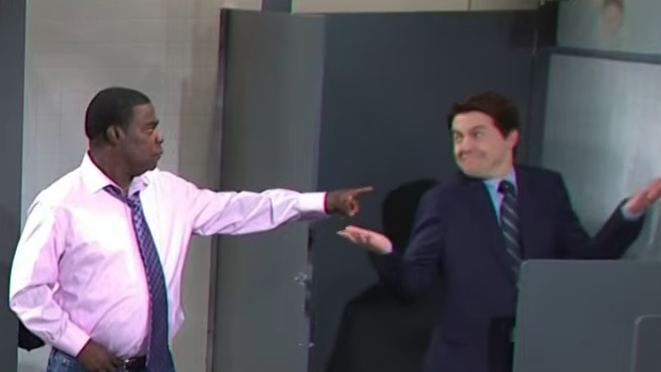 He appeared alongside Bowen Yang, Chris Redd, host Kieran Culkin, Andrew Dismukes and Alex Moffat in a sketch set in a men’s restroom, which saw office co-workers exchanging banal small talk and jokes, before breaking off to make confessions directly to the camera.

The sketch kicked off with an exchange at the urinal between the characters played by Yang and Redd, with Redd commenting on the frequency of his restroom run-ins with Yang. “Third time this week?” he says. “What is this, your office?”

“Well, you know what I always say,” Yang replies. “Boss man does what the boss man does.

“I’ve never said that in my life. Why am I saying that?” he then says to camera. “Why are we not ourselves when we’re in the men’s room? Everyone just panics and blurts something out.”

Later in the sketch, Moffat makes his own confession, noting that he “killed a man” in 2012.

Shortly thereafter, Morgan unexpectedly bursts out of a stall, saying, “Trust me, you don’t want to go in there.” He then points at Moffat’s character and exclaims, “And this dude killed my brother!”

Morgan last appeared on SNL in a 2019 episode hosted by Eddie Murphy. He was a cast member on the long-running late-night sketch series between 1996 and 2003.

Culkin tonight made his hosting debut, with Ed Sheeran as musical guest. Deadline will update this story with video when it comes in.