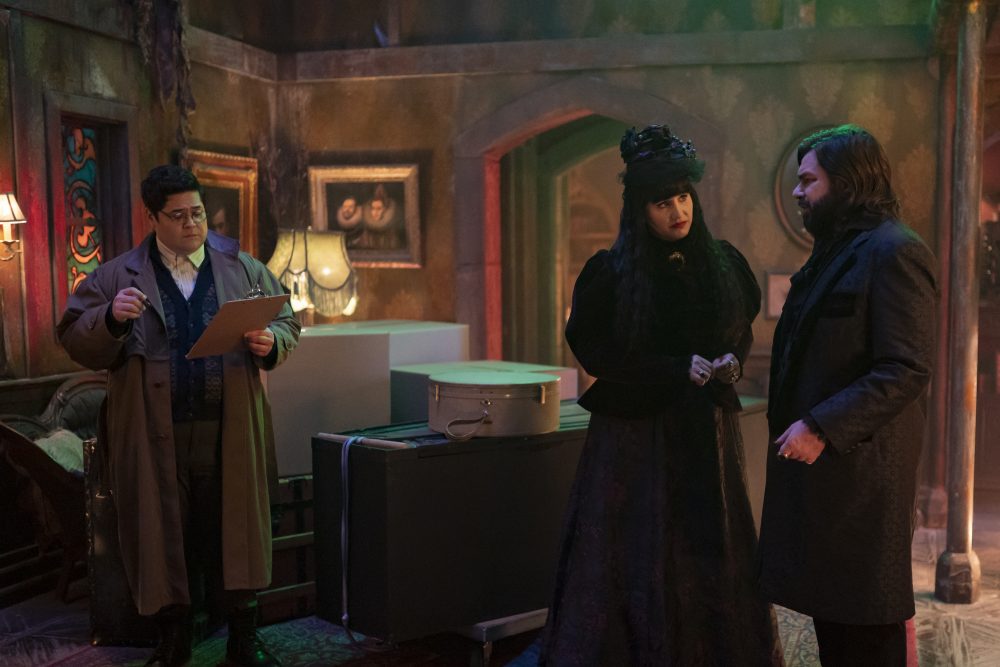 SPOILER ALERT: This story contains details of tonight’s Season 3 finale of FX’s What We Do in the Shadows.

FX’s What We Do in the Shadows nearly made fans cry with the Season 3 finale Thursday night, but baby, it’s all going to be OK.

Colin Robinson (Mark Proksch) died on his 100th birthday and the vampires left his body decaying as they all headed out into the world finding where they truly belong. But before a discussion can be had regarding the ending, let’s go back to the beginning of the episode.

The housemates are figuring out how to grieve after the death of the energy vampire, which lead to some major decisions. Nadja (Natasia Demetriou) is going back to London and is under the impression her husband Laszlo (Matt Berry) will be accompanying her. But he’s not, but he isn’t sending her off to ol’ Blighty solo. He trapped Guillermo (Harvey Guillen) in a box just as Nandor (Kayvan Novak) had agreed to turn his familiar into a vampire.

As Nandor gets ready to travel the world with Guillermo, he is taken aback when he is met only by Guillermo’s suitcase completely unaware that Laszlo was behind the ghosting.

When Laszlo returns to the house they shared, he checks on Colin Robinson’s body only to discover the latter’s body is in a very advanced stage of decay with a hole in his stomach. A trail of some sort of gross liquid leads into another room.

As Laszlo follows the path, he discovers a baby Colin Robinson crawling.

Series star Proksch and executive producers Paul Simms and Sam Johnson break down what exactly went down in the finale and how it sets up Season 4.

DEADLINE: Colin Robinson went on quite the journey this season. Mark, how was the character different than the one we’ve gotten to know?

MARK PROKSCH: Energy vampires appear to be pretty naive when it comes to their past. So he spent this season learning about where he came from, what his lineage is. And apparently, energy vampires only start wondering that when they’re close to their 100th year. It was interesting playing the character because I had an idea of where he was going all year and why he and Laszlo were hanging out. It was fun changing my performance with that knowledge.

PAUL SIMMS: I think there were moments this season where Colin was sweeter than he usually is. Like when Lazslo is giving the toast and saying how Colin is the most boring person I’ve ever known but I’m glad to call him a friend. The shot of Colin shows him just pleased, which is different from what we’ve seen before.

DEADLINE: So now there’s this baby with Colin Robinson’s face but is that even him anymore or someone totally new?

SIMMS: That’s exactly what a lot of Season 4, which we’re shooting right now, is about. Is it inevitable that the baby will grow up to be an energy vampire again or is it possible for him to avoid that fate and become a normal, interesting human being? That’s really the puzzle of Season 4 and what drives it with nature vs. nurture. It’s a little bit of: Can you avoid your fate? Are you destined to be what you’ve always been or can you make a new start? I know this makes it sound like it’s some heavy, premium cable downer of a show, but it’s all as silly and cartoonish as it ever was before.

SAM JOHNSON: Once you hit 100, you’re automatically tipped to being interesting in some way. You’re fodder for the local paper. So, I think you can’t continue being an energy vampire even one that’s slightly more interesting than you were before.

DEADLINE: With Laszlo being the only one left to look after baby Colin Robinson, what kind of parent will he be?

PROKSCH: Laszlo is such a blowhard and just a windbag and an idiot, that the last thing you would want is to entrust into his care a helpless anything.

SIMMS: Yet, at the same time, I think Laszlo despite himself having to show Colin a good time during what he thought was his last moments on earth, has developed some kind of affection. Laszlo is supposed to go to England but stays behind because there are beings that require actual care and he has this sense of duty. He also probably has some scientific interests in the experiment of nature vs. nurture. Can he form this Colin into a different creature than what he was?

DEADLINE: Laszlo has to be kicking himself for getting rid of Guillermo, who takes care of everything for the vampires?

SIMMS: Nandor, as we’ve seen this season, would be sad. Nandor does not acknowledge to himself that he has affection for Guillermo that goes beyond liking that he has someone who will brush his hair.

JOHNSON: I think you’re right. Ten minutes with a crying baby and he will be regretting pushing his only helper into a coffin.

DEADLINE: When Season 4 returns, will Colin Robinson still be a baby or will he grow very fast?

SIMMS: I will say, yes, he’s a baby. We’re not going to be cheap and rip people off and go like, “Well, guess what? I grew up overnight.” Almost the entirety of Season 4 is about him maturing and sort of imagination of the fact that as much as we love them, children can also be energy vampires because they make a lot of noise and talk about a lot of boring stuff.

DEADLINE: Mark, what’s it been like shooting as a baby?

PROKSCH: A lot of that will be done separately on green screen and other effects.

SIMMS: Figuring out how to do what we wanted to do has been one of the biggest challenges we’ve faced on the show so far. As with the baby that you saw at the end of the episode, it’s a combination of prosthetics, building bodies [that] puppeteers operate, and some practical and digital stuff put in. This is the biggest technical challenge we’ve made for ourselves, but the idea just seemed so funny.

DEADLINE: The team is all over the world. Will they be brought back together by the baby?

SIMMS: Not necessarily by baby Colin but my favorite parts of the show are when it’s all the main characters together in a room—no matter what they’re talking about.

DEADLINE: Kristen Schaal and Nadia’s doll had a much bigger role this season. Will they join the core group in a big way in Season 4?

SIMMS: Kristen is coming back next season and the doll, unless she has another offer, I think she’ll be back also.

DEADLINE: Taika Waititi popped into the finale for a bit. Could he and [creator] Jemaine [Clement] show up next season for a baptism or something?

All three seasons of What We Do in the Shadows are available to stream via Hulu.