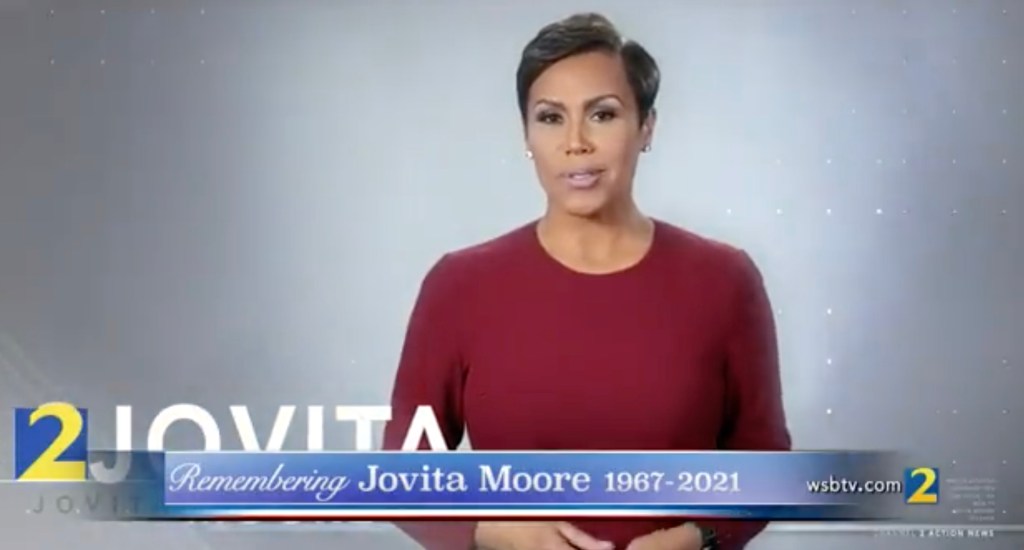 Jovita Moore, a longtime and beloved TV news anchor in Atlanta died last night, seven months after disclosing that she had been diagnosed with an aggressive form of brain cancer. She was 53.

Her death was announced by Atlanta station WSB-TV in a statement that said Moore died overnight. “Back in April doctors discovered two masses on Jovita’s brain,” the statement explained. “After surgery, they diagnosed her with glioblastoma, the most common type of brain cancer.” There is no cure for glioblastoma.

Moore joined WSB Channel 2 Action News in 1998, anchoring evening newscasts. Prior to taking the job in Atlanta, Moore worked on air at WMC-TV in Memphis and KFSM in Fayetteville and Fort Smith, Arkansas, where she started her TV career after graduating in 1990 from the Columbia University Graduate School of Journalism in New York and landing an internship at the New York Times.

According to WSB, Moore donated many hours to civic associations and non-profit organizations in the Atlanta area, mentoring students and sitting on several boards of directors.

Moore’s death was mourned by Atlanta Mayor Keisha Lance Bottoms and her husband, with the mayor saying in a statement that the couple is “deeply saddened by the loss of our friend. Even those who did not know her personally felt a deep and personal connection to Jovita. She loved Atlanta dearly. May her beautiful spirit soar. Jovita will be truly missed.”

Moore received a career award from The National Academy of Television Arts & Sciences Southeast Chapter in 2017, and was a member of the Atlanta Association of Black Journalists and the National Association of Black Journalists. She was a member of Leadership Atlanta’s Class of 2007, and was featured on the 2007 list of 40 Under 40 by Georgia Trend Magazine. She won several Emmy Awards during her tenure at WSB.

In its statement today, WSB said, “Her awards and accolades are endless, but for those of us here at Channel 2, her heart and her spirit are what our newsroom was built around. Please join us in saying a prayer for her beautiful children and her mother.”

Moore is survived by her mother and two children.

Watch WSB’s tribute to Moore above.