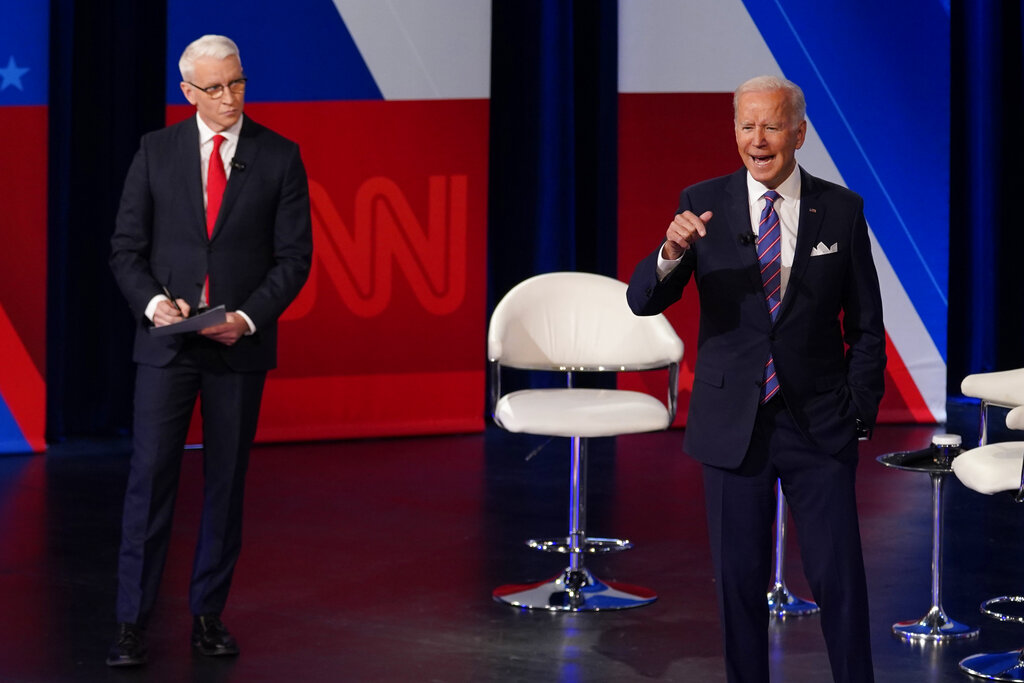 President Joe Biden returned to CNN for another town hall amid slumping poll numbers, the continued Covid pandemic and drawn out negotiations for his Build Back Better agenda.

Biden, though, came across with a sense of confidence that he’d get his legislative cornerstone passed — with a bit of irreverence and a reality check.

“Look, in the United States Senate, when you have 50 Democrats, every one is the president,” Biden said, as he made pretty clear that two of them, Sen. Joe Manchin (D-WV) and Sen. Kyrsten Sinema (D-AZ) were the reason that a $3.5 trillion plan would be something much smaller.

“It’s all about compromise,” Biden said, particularly when there are no votes to spare.

Far more than Biden’s past two town halls for the network, this event got into much more of the nitty gritty details of negotiations and what’s possible. That’s already generated some disappointment in parts of the Democratic coalition, but it’s a part of the legislative sausage making all too familiar to Biden. At one point the president quipped that he was “a senator for, like 370 years,” while insisting to host Anderson Cooper that this wasn’t even the most difficult negotiation he’s been involved in. (That was the assault weapons ban).

Biden confirmed a lot of the reporting over the past few days: Gone is the plan for two years of free community college, a centerpiece of his election campaign. Also out is 12 weeks of paid family and medical leave, now down to four weeks. Biden denied that a centerpiece of his climate agenda was out, a plan in which polluters would have to pay a penalty if they don’t reduce the amount of carbon they use. But he said Manchin opposed such a proposal, and that he’s instead working with him to try to find another route with tax incentives.

“Joe is open to my convincing him,” Biden told Cooper.

In fact, during the event, Biden got into enough of the  Build Back Better negotiations that CNN senior White House correspondent Phil Mattingly tweeted that he had “spent 72 hours on endless calls digging out detail after detail on private meetings and it turns out Biden was just going to lay them all out in the A block of the town hall…”

Biden also confirmed that the legislation likely won’t be able to include raising of the corporate tax rate or those on high income individuals because of Sinema’s opposition. That has left the White House and Democratic leaders looking at other ways to pay for the plan, which multiple reports have pegged at a new topline number of around $1.9 trillion.

That has been a difficult compromise for a number of progressives, who wanted a much larger bill, as they see it as perhaps the last best chance to pass their agenda until the midterms — and perhaps for years afterward. One advocacy group, Climate Power, even ran an ad during the town urging passage of the bill, even if it may have been a bit of preaching to the converted.

Biden actually joked that his wife, Jill, a community college professor, was none too pleased when he told her that the free-tuition proposal was dropped. “The White House has a lot of bedrooms, and she went like this,” Biden said, his hand pointing in the direction of, “Down the hall.”

Yet Biden was confident that there will be a bill.

“Are you close to a deal?” Cooper asked him.

“I think so,” Biden responded.

The town hall came at an opportune time for the White House.

Biden’s beating in the polls, starting with the mid-summer uptick in Covid cases due to the Delta variant, followed by the chaotic withdrawal from Afghanistan and, in recent weeks, the protracted efforts to reach agreement on his agenda has fed into a narrative that his administration is on the cusp of failure and Democrats headed for electoral disaster.

Earlier on Thursday, CNN analyst David Gergen wondered why the administration wasn’t doing better on messaging, and warned that the White House would have to do a better job at selling the Build Back Better plan.

Biden tried to do that in the town hall format, where he seems more comfortable as he interacts with “regular” folk, those non-journalists who tend to ask more about policy than process. The question is whether those moments will break through. On MSNBC, Chris Hayes was focused on the House vote to hold Steve Bannon in contempt, while Fox News featured Tucker Carlson opening his show tossing a truckload of red meat to his audience with a tirade on “The Madness of King Biden.”

Yet as much as Biden talked of the state of negotiations, he didn’t display much of any sign of pessimism over where things stand, and seemed to relish a bit in some of the media opposition.

“I turn on Fox to find out how popular I am. I think I am at 3% approval,” Biden said wryly, before repeating what he has said before of some of the network’s conservative hosts who have blasted him for his vaccine mandates.

“You know, they mandate vaccinations? I find that mildly fascinating.” (In fact, the policy requires employees to provide proof of vaccination or submit to daily testing.)

He also gave an answer destined to give rightward talk show hosts a burst of new material, when he was asked about the flow of migrants to the southern border. “I’ve been there before, I know it well. I guess I should go down,” Biden said, while noting that he’s been consumed with other priorities.

He did predict that the Build Back Better plan will still be transformative, even if so much of the media attention of the past few days has been on what has been taken out of bill, not what is still in it.

At the end of the town hall, Cooper reminded him of the 2010 signing ceremony for the Affordable Care Act, aka Obamacare, when Vice President Joe Biden whispered to President Barack Obama that the legislation was a “big f—ing deal.”

When Cooper brought that incident up, Biden gave the sign of the cross.

Cooper asked, “The Build Back Better plan. Is it a bigger f—ing deal than that?”

“I would say that this is a bigger darn deal,” Biden said.