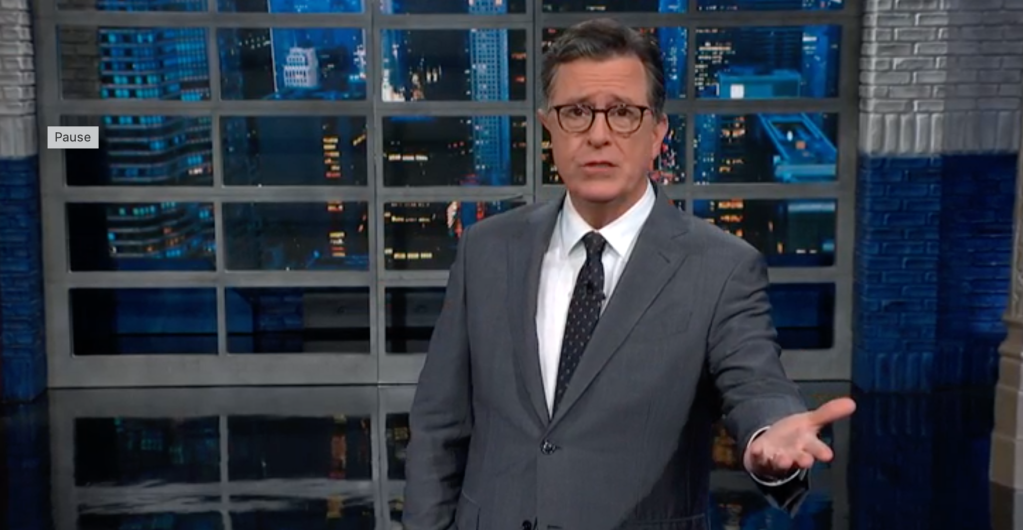 On tonight’s episode of Late Show With Stephen Colbert, Colbert celebrated comic superhero Superman, and his new motto: “truth, justice, and a better tomorrow.” In typical fashion, he couldn’t let this one go without adding his own two cents.

“This of course is a big change from his original motto: wearing underwear on the outside since 1938!”

Over the weekend at the DC Fandome event, DC comics announced the new motto, changing it from the previous one which was actually, “truth, justice and the American way.”

The host comments on why the old slogan may not work in today’s climate.

“If Superman really followed the current American way. It would fly to school board meetings to scream about how the vaccine gave him heat vision.“

According to Colbert the change of course didn’t go over quietly with some comic fans, and particularly Fox news.

“DC comics explained these slogan changes in a statement saying it’s intended to honor. Superman’s incredible legacy of over 80 years of building a better world. Adding the new catchphrase is meant to fully embody that hope for everyone or as Fox news would put it: new communist, Superman cancels. Mr. Potato heads, Christmas penis.”

“Of course I’m kidding, but not by much.” He does put the joke into perspective with a clip of various Fox news anchors commenting calling Superman “more palatable to the communist party of China,” or as one speaker put it, “I’m going to call him Superman and I’m going to say the American way and merry Christmas!”

Of course Colbert isn’t going to let that slide so he adds, “And they’re going to say, okay, aunt Nancy, what do you say you put down the bottle of Jack Daniels and give me that steak knife.”

Colbert’s entire opening monologue can be found above.