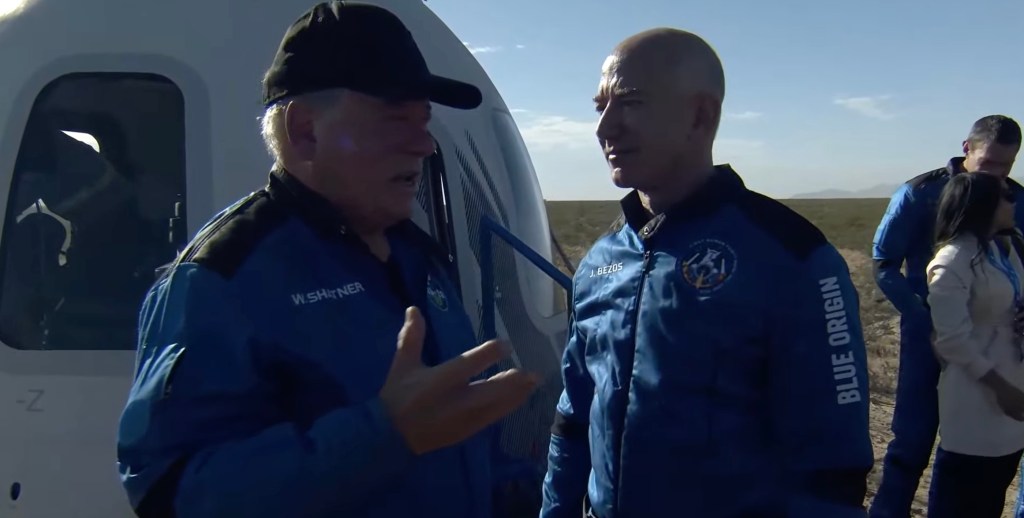 UPDATE, 8:29 AM PT: As other Blue Origin crew members whooped and hollered and pop champagne outside their landed spacecraft, William Shatner chatted with Jeff Bezos to describe the experience, often in philosophical terms.

Now the oldest person ever to go into space, Shatner, 90, called his flight “unbelievable” and “profound.”

“I hope I never recover from this,” Shatner, filled with emotion, told Bezos, in a moment captured live by Blue Origin and carried on cable networks.

He focused on the contrast of the blue of the earth with the blackness of space, even wondering if it is a situation where “that is life and that is death.”

“What is unknown until you do it is this pillar is this soft blue, the beauty of that color and it is so thin, and you are through with it in an instant,” Shatner said.

He described the thinness of the Earth’s atmosphere compared to the vastness of space.

“The jeopardy, the vulnerability of everything is so small. This air that is keeping us alive is thinner than your skin,” he said.

“Star Trek” star William Shatner gets emotional with Jeff Bezos after becoming the oldest person to go to space: “This experience is something unbelievable” pic.twitter.com/Eni1thewmv

UPDATE, 8:04 AM PT: The Blue Origin mission carrying William Shatner is complete, apparently flawless, after the capsule landed via parachute in the Texas desert and the booster rocket successfully landed back on a pad.

Jeff Bezos was at the site to open the hatch and greet the crew as they came off the spacecraft.

The launch went off apparently without a hitch, after two delays. It is the second human flight on the rocket, called the New Shepard.

“This is like nothing I ever experienced before,” Shatner said, according to a flight controller.

William Shatner, who played the iconic role of Captain Kirk on “Star Trek,” has launched into space on a Blue Origin flight. https://t.co/lbEIy8p2E4 pic.twitter.com/Il4rVxewMX

UPDATE, 7:44 AM PT: With the second hold lifted, a Blue Origin rocket with William Shatner among the crew was cleared for launch.

Some commentators contrasted the relatively primitive technology compared to that seen on Star Trek and other sci fi shows.

“Reality meets Hollywood here and we are trying to have reality catch up to the science fiction vision,” Miles O’Brien, who long covered space for CNN, said on the network before the launch.

UPDATE, 7:16 AM PT: William Shatner and three others boarded the Blue Origin capsule for a brief spaceflight on Wednesday, a mission that will make the Star Trek actor the oldest person ever to go into space.

But with about 15 minutes to launch, the clock was stopped for another hold. An earlier delay lasted more than 30 minutes.

Jeff Bezos, the owner of Blue Origin who was part of the first manned mission in July, escorted the crew to the West Texas launchpad. He shook hands with Shatner before he entered the capsule.

Before the launch, they were read messages from those who took the previous Blue Origin flight. Mark Bezos’ message was “you lucky bastards.” He also quoted from Mr. Spaceman, with lyrics by William Shatner, a nod to Shatner’s kitschy 1970s rendition. Hey Mr. Spaceman, won’t you please take me along for a ride?

PREVIOUSLY: William Shatner was poised to become the oldest person ever to go into space in the latest flight of Jeff Bezos’ Blue Origin, after the mission was put on hold for about 30 minutes for what was described as “vehicle readiness.”

The launch was scheduled to take place at 7 AM PT.

Shatner, 90, was being joined by three other crew members in what will be a 10-minute, suborbital space flight on the capsule. They began heading to the launch site with Bezos after word that the hold was lifted.

Cable news channels covered the launch, filling airtime with commentary from space experts and former astronauts. Networks extensively covered Bezos’ spaceflight in July and Shatner’s recent addition to the crew undoubtedly added to the attention for the latest mission.

A scheduled launch for Sunday was delayed due to bad weather.

Last week, Shatner spoke at New York’s Comic Con and said , “I’m terrified. I’m Captain Kirk, and I’m terrified. I’m not really terrified — yes I am. It comes and goes like a summer cold. I’m planning on putting my nose against the window [once I’m in space], and my only hope is I won’t see someone else looking back.”

When it was announced that he would be on the flight, Shatner said in a statement, “I’ve heard about space for a long time now,. I’m taking the opportunity to see it for myself. What a miracle.”

Also on the flight was Audrey Powers, Blue Origin’s vice president of mission and flight operations, as well as two who paid for the mission, Glen de Vries and Chris Boshuizen. Shatner’s ride was comped by Blue Origin.