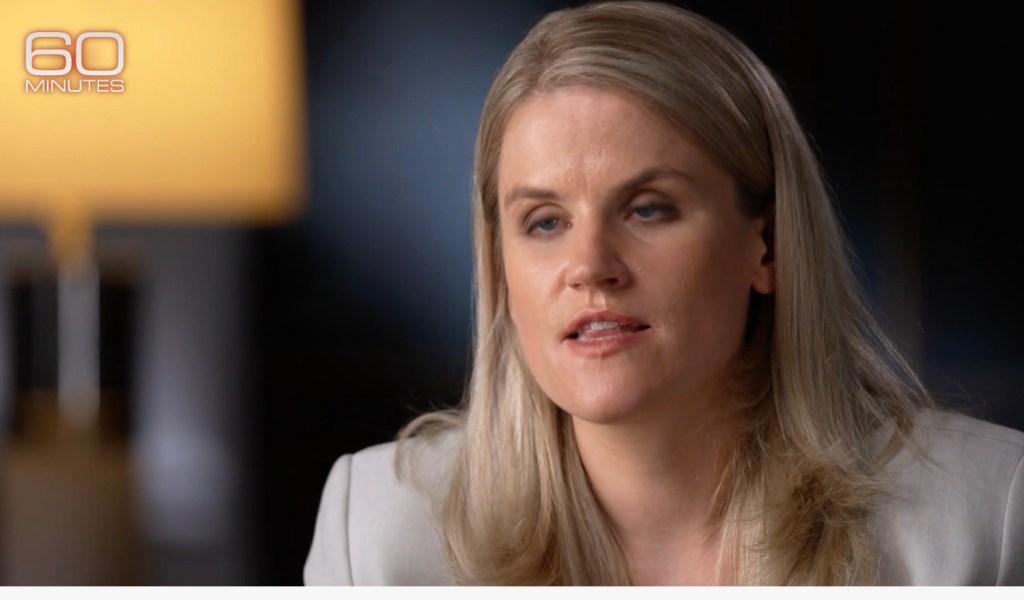 A former Facebook employee who has, with the release of a trove of internal documents, become a whisteblower over the company’s practices, revealed herself on Sunday on 60 Minutes.

Frances Haugen, a data scientist who until May worked on the company’s efforts to combat misinformation, told correspondent Scott Pelley that the company is “paying for its profits with our safety.” Haugen copied thousands of pages of internal documents, revealing research on how its platform amplifies hate speech and how it can be harmful to teens. She released those documents to The Wall Street Journal, which revealed them in stories last month that immediately triggered criticism from Capitol Hill lawmakers.

Haugen’s attorney also filed at least eight complaints with the Securities and Exchange Commission, on the grounds that the company is making material misstatements that adversely affect investors.

She is scheduled to testify before a Senate Commerce subcommittee on Tuesday.

In the interview, Haugen said that she worked on the Civic Integrity unit at the company. She said that after the election, the unit was dissolved, but “fast forward a couple months, we got the insurrection. And when they got rid of Civic Integrity, it was the moment where I was like, ‘I don’t trust that they’re willing to actually invest what needs to be invested to keep Facebook from being dangerous.’”

She pinned part of the blame on the spread of misinformation and hate speech on how Facebook has chosen to design its algorithm.

Haugen said that they are “optimizing for content that gets engagement, or reaction. But its own research is showing that content that is hateful, that is divisive, that is polarizing, it’s easier to inspire people to anger than it is to other emotions.”

“Facebook has realized that if they change the algorithm to be safer, people will spend less time on the site, they’ll click on less ads, they’ll make less money,” she said.

The company told 60 Minutes that the work of the Civic Integrity unit was given to other units. But 60 Minutes showed how the platform was used to help organize the January 6 insurrection.

In the interview, Haugen said that “no one at Facebook is malevolent, but the incentives are misaligned, right?”

“Like, Facebook makes more money when you consume more content,” she said. “People enjoy engaging with things that elicit an emotional reaction. And the more anger that they get exposed to, the more they interact and the more they consume.”

The company told 60 Minutes that “every day our teams have to balance protecting the right of billions of people to express themselves openly with the need to keep our platform a safe and positive place. We continue to make significant improvements to tackle the spread of misinformation and harmful content. To suggest we encourage bad content and do nothing is just not true.”

The company also told 60 Minutes that “if any research had identified an exact solution to these complex challenges, the tech industry, governments and society would have solved them a long time ago.”