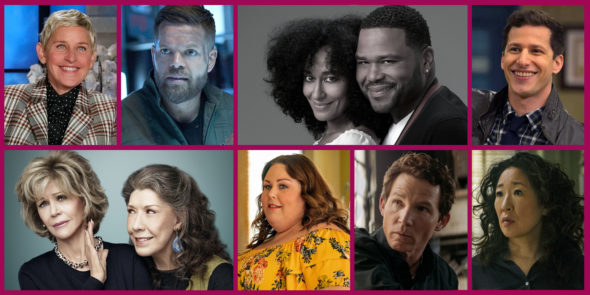 Here’s a list of TV shows that aired (or are expected to air) during the 2021-22 season (roughly September 2021 through August 2022) but won’t be back for the 2022-23 season. Not finding a show that you believe has been cancelled? Check our other season lists or our network, cable, and streaming show status pages.

This list will be updated as the season progresses so feel free to bookmark and check back. If we’ve missed something, please let me know.

#blackAF (Netflix)
This comedy series starring creator Kenya Barris was initially renewed for a second season but that order was later rescinded. Barris had a multi-year $100 million deal with the streaming service but moved on in late 2020.

Animal Kingdom (TNT)
A gritty crime family drama that was based on an Australian series of the same name, this series ends with its sixth season.

Arthur (PBS)
Based on the children’s books by Marc Brown, this animated educational series ends with its 25th season.

Black-ish (ABC)
The alphabet network announced that the family comedy comes to a close with its eighth and final season.

Brooklyn Nine-Nine (NBC)
Season eight of this workplace comedy was supposed to air during the 2020-21 season. However, due to the pandemic, the final season was delayed until the 2021-22 season.

Bulletproof (The CW)
A British police procedural series, this show was cancelled in the UK following allegations of sexual misconduct by 20 women against co-creator and star Noel Clarke.

The Crown (Netflix)
Created by Peter Morgan, this historical drama chronicles the reign of Elizabeth II; the Queen of the United Kingdom and 15 other Commonwealth realms. It’s been announced that season six is the end.

The Ellen DeGeneres Show (syndicated)
The most popular daytime talk show for many years, the host has chosen to end the series with season 19.

The Expanse (Amazon)
This science-fiction drama ran for three seasons on Syfy before being cancelled. Amazon Prime Video rescued the show and gave it three more years. Season six is the end.

His Dark Materials (HBO)
Based on a trilogy of novels by Philip Pullman, this dramatic fantasy series ends with a third season of episode episodes.

Killing Eve (BBC America)
A black comedy and spy thriller, the show follows a British intelligence investigator who is assigned to capture a psychopathic assassin. It was renewed for a fourth and final season.

Law & Order: For the Defense (NBC)
The peacock network ordered this spin-off for Fall 2021 but later cancelled those plans. Rest assured that another Dick Wolf series is already in the works.

Motherland: Fort Salem (Freeform)
A supernatural drama about witches who defend the United States, this show has been renewed for a third and final season.

On My Block (Netflix)
This teen comedy-drama follows four lifelong friends in inner-city Los Angeles. It ends with year four.

Peaky Blinders (Netflix)
A historical crime drama, this show is ending with season six but is expected to have a wrap-up movie.

The Split (SundanceTV)
This UK drama series takes a look at marriage and divorce in the high-end divorce circuit. It ends with a third season.

This Is Us (NBC)
The popular story of the Pearson family wraps up with a sixth and final season.

Trickster (The CW)
A Canadian series, this drama was renewed for a second season but those plans were later cancelled.

Ultimate Slip ‘N Slide (NBC)
Filming of the competition series was shut down following an outbreak of Giardia. Looking at the logistics and costs of restarting production, the peacock network opted to scrap the show.

What do you think? Have any of your favorite shows been cancelled? Which ones are you sorry to see end?