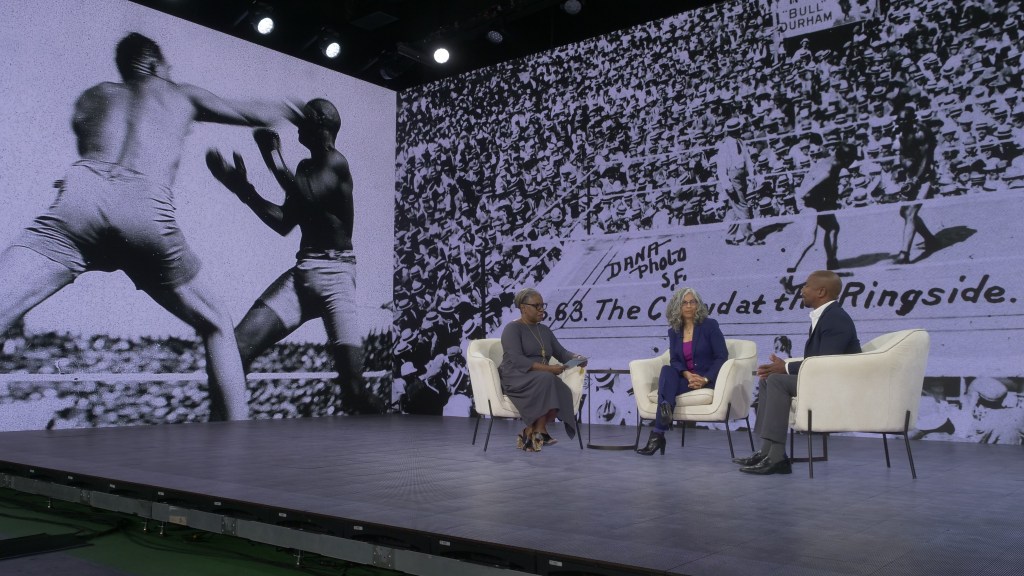 When the Smithsonian Institution launched a new series of events this week called Our Shared Future: Reckoning with Our Racial Past, it included a streamed forum from Los Angeles, where participants were immersed in an LED set and their discussion interspersed with taped testimonials on race from a diversity of Americans.

It’s just a start of what producers hope will draw participants from around the country in a conversation on race, using what is called “experiential” media.

Smithsonian tapped Don Mischer, whose production company in 2020 launched DM.Experiential, after Smithsonian Institution Secretary Lonnie Bunch had worked with him on the ABC special Taking The Stage: African American Music and Stories that Changed America, tied to the opening of the National Museum of African American History and Culture.

“Our jobs is to sort of take our experience producing entertainment and help tell the story in a human way so that it connects and resonates, said Charlie Haykel, partners in DM.Experiential along with Juliane Hare, and Christopher Laue. “We know it is a complex story and we are going to do things right and some things we are going to continue to learn from.”

In addition to the production and taped segments, they also are producing what he calls “explainer” pieces on a topic, 1 1/2 minute segments on the central issue of a discussion. Also planned are “pop ups” around the country. An example: For Juneteenth, they did a building side projection in Galveston, TX that featured imagery of objects from Smithsonian’s collection.

“The people who might see those images, and the people whose those images might trigger something in their head, they ‘re probably not going to tune in if we said we are doing a documentary on Juneteenth,” Mischer said. “But if they are walking by this thing and happen to experience that and see it, we’ve gotten to them, even though they might not be predisposed to hear anything about it. And so, some of this is going to be hit and miss, but it’s a new approach, and I think this is the way that we are going to be communicating now.”

The first event — which can be viewed here — was produced in Los Angeles and debuted on Thursday, and focused on race, wealth, and wellness. The website for the project also includes additional content, as well as what Haykel calls a “production bible,” so viewers can plan and produce their own events.

“We ultimately know that everybody’s community, and it could be everybody’s neighborhood, has slightly different topics within these broad topics that are important to them,” Haykel said. “And so we are trying to really involve the country in this important discussion.”

Also in the works is the use of augmented reality to tell stories tied to Smithsonian’s collection. Another topic planned in Our Shared Future is arts and culture, so the project could feature, say Charlie Parker’s saxophone. Via an upcoming app, augmented reality could make it seem to appear in a viewer’s living room, and they could “walk around it, have a curator prerecorded talk about it. It could tell the story about jazz clubs, different forms of music and how they related to race,” said Haykel. He cautioned that specific example was an idea, but not definite, as they still devise their plans for the two year Our Shared Future project.

“The other thing we’d like to do with it is to geo locate these things, so let’s say let’s say you happen to be in Manhattan and you are walking on [the street that] Birdland was on,” Haykel said. With augmented reality, “you could actually see the saxophone there on the sidewalk, and you might see pictures of what Birdland looked like when it was in its heyday, and you could hear about the culture and hear about Charlie Parker and other jazz musicians, and it would all ultimately relate back to the discussion we are having.”

The idea, he said, is to create a “much stronger emotional connection to the material, and so we are trying to create those types of moments, where it’s a little bit of a ‘wow’ factor and it both educations entertains.”

Mischer said, “we are television producers but I think that makes us very good for the experiential ends of this as well.” He said that when they were doing Taking the Stage, Bunch, then the director of the African American History museum, gave them some important direction that has helped guide them on this project. “Lonnie made it really clear: This is not about lack history. Yes, it’s got Black history in it, but this is American history.”

“We want to raise the profile as much as we can of this,” Haykel said. “But we want to involve people who are not experts but are smart and are curious, because we feel the audience needs to see themselves involved in this discussion too.”