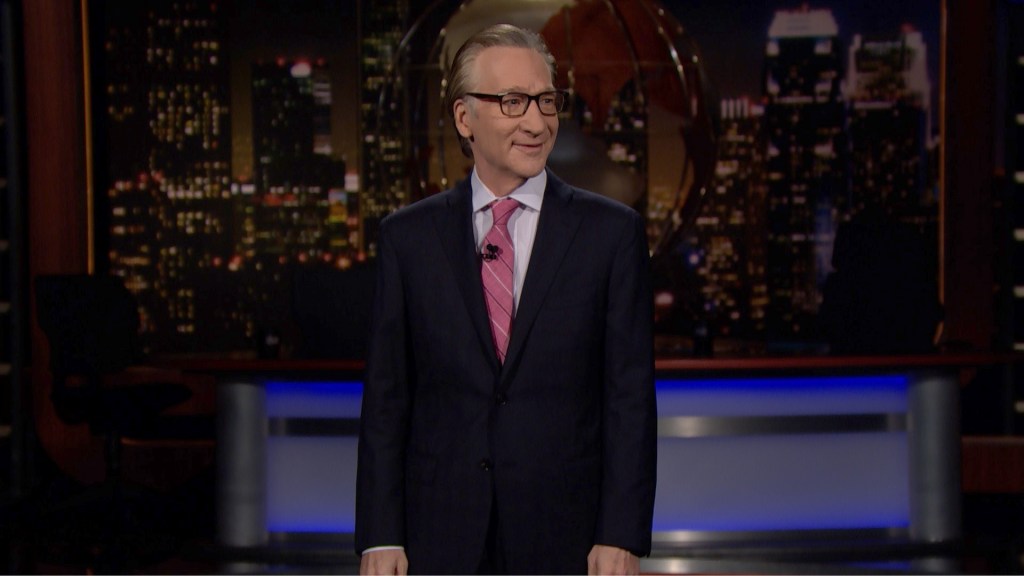 “So America is no longer the world’s policeman, we’re the world’s student loan officer,” said Bill Maher tonight of Joe Biden’s pledge to “hunt you down and make you pay” the perpetrators of yesterday’s horrific attack outside Kabul Airport.

“I’ll tell you, America not so good at wining wars, but the getting the fuck out part, we’re getting a lot of practice at that,” he said beforehand, to one of many big laughs before his studio audience.

“Of course there was this suicide bombing which makes it a giant tragedy now,” the Real Time with Bill Maher host stated of the evacuation of over 100,000 people from the South Asian nation in the last week. “Am I the only one who thinks we did this completely ass-backwards? We pulled the troops out, and then tried to evacuate the civilians? I feel that was a little backwards.”

Maher’s monologue comes one day after 13 U.S. service members and 169 Afghans who were trying to escape the South Asian nation now under the theocratic rule of the Taliban, were killed. With responsibility claimed by ISIS-K, the suicide bombing injured hundreds huddled in front of security checkpoints. On the other side of those doorways are transport planes and liberation for Americans still in the country, as well as Afghans who worked with or supported the U.S.’s nearly 20-year intervention in the nation.

And Maher tonight didn’t think it was a pretty sight.

“All the roads to the airport are gridlocked of course, the airport is complete mayhem, there is no sanitation, no power,” he said. “Today the promoters of the Fyre Festival said, that is so poor planning,” Maher then said in a reference to the scam 2019 big ticket music festival that lacked food, accommodations and even artists.

Under pressure to reconsider his decision to leave Afghanistan and having warned of just this sort of attack in a speech last week, President Joe Biden on August 26 told the cameras and those behind the attacks that America would not “be intimidated.”

Just before the HBO series, which records in LA on Thursdays, aired tonight, the Pentagon announced it had conducted a successful drone strike on a so-called “ISIS-K planner.” As dozens of flights continued to take people out of Afghanistan and thousands waited outside the airport in Kabul in scant hope of being on those planes, Central Command spokesman Capt. Bill Urban said “initial indications are that we killed the target.” Capt. Urban added: “We know of no civilian casualties.”

Despite the worst loss of America life in over a decade in the so-called “forever war” on Thursday, President Biden also maintained that all U.S. forces will leave Afghanistan by August 31. As Maher pointed out, so far, over 100,000 people have been evacuated from Afghanistan by the American military in one of the most ambitious humanitarian airlifts ever. Tens of thousands are expected to leave before the last troops leave.

Already put in motion to some degree by Biden’s Celebrity Apprentice host predecessor, the deadline for the exit from Afghanistan is set for just under two weeks before the 20th anniversary of 9/11. The al-Qaeda orchestrated multi-plane attack on New York City and Washington D.C. and outside of Shanksville, Pennsylvania resulted in 2,977 deaths. Those tragedies unleashed the initial assault on Afghanistan in the fall of 2001 that saw the repressive Taliban overthrown and a hunt for Osama Bin Laden that would go on itself for almost a decade.

Mixed with the 2003 launched war in Iraq, the Afghan War cost U.S. taxpayer over $2 trillion, with almost the same amount being spent for medical coverage and more for veterans of the conflicts. In the real cost of the war, approximately 2,448 members of the American military were killed over the 20 years the U.S.A. was in the county, with the death of almost 4,000 contractors too. More than 20,000 U.S. troops were injured to varying and heartbreaking degrees over the two-decade conflict. Around 100,00 Afghan security forces and citizens have died in the war, with 1,200 NATO troops losing their lives.

Afghanistan and ISIS-K (“not a boy band”) were not the only topics on Real Time on Friday.
California’s endless fire season, the Gavin Newsom recall election, the Jeopardy host search fiasco and Donald Trump’s endorsement of Hershel Walker in the Georgia Senate race were also among Maher’s targets

As his guests tonight, Maher had former BBC anchor and broadcasters Katty Kay and lobbyist and Faith and Freedom Coalition boss Ralph Reed. Also joining the show was Washington Post’s Craig Whitlock, whose book The Afghanistan Papers: A Secret History of the War comes out on August 31 — the same day Joe Biden says America will end its military involvement in Afghanistan.

At the very end of the show, Maher chastised both those on the right and the left of the political spectrum in America to “have a little perspective” on their romanticization and “woke ideology” critique of this country. To make his point, amidst going back to Mike Richards losing his new gig as the successor to Alex Trebek, the host went around the world with broad strokes and called out “real oppression,” often with thin equivalency.

In the strongest portion of the rant, Maher also told the tale of Afghan comedian Nazar Mohammad and his torture and killing by the Taliban last week. In contrast, he noted how the administration of George W. Bush came down hard on him in the days following the monstrosity of 9/11 after Maher said the 19 murderous hijackers weren’t “cowards.” Maher also spotlighted his ongoing feud with Donald Trump and how the the POTUS attacked him from the podium and in the courts.

“Neither experience was pleasant, but I didn’t have to worry about being dragged until I’m dead behind a Toyota Tacoma,” Maher asserted.

Real Time with Bill Maher is off next week and back on September 10.