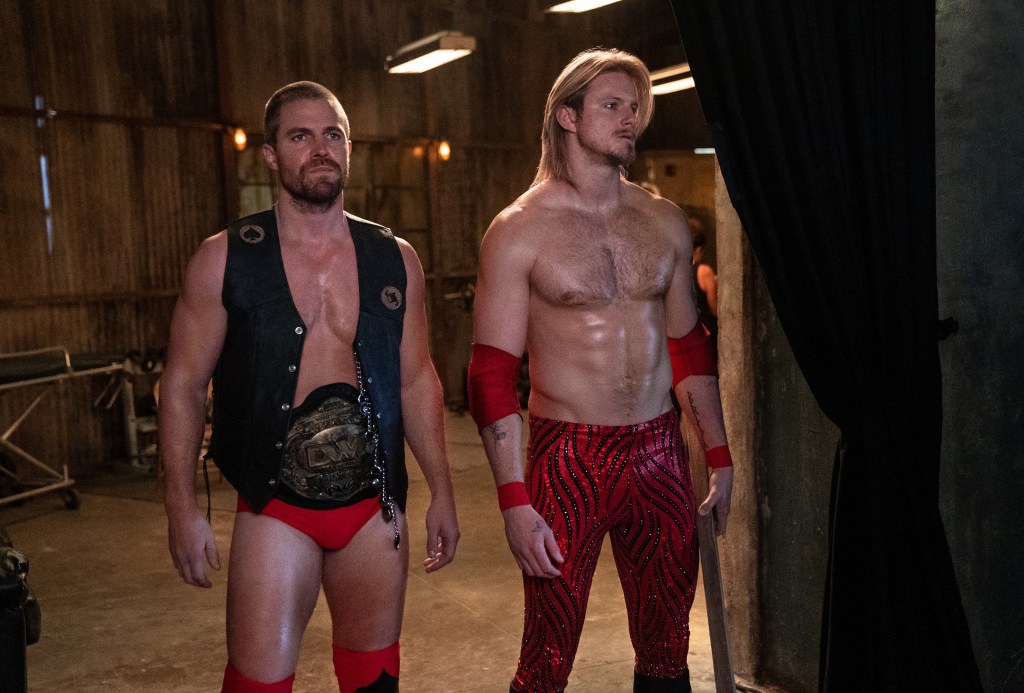 At the height of my wrestling and boy band obsession, I wrote a crossover fan fic in which *NSYNC’s Justin Timberlake dated a WWE wrestler who was best friends with the Hardy Boyz and Lita. It was not good.

Much like NBC’s beloved Friday Night Lights, which captivated football fans and non-fans alike, wrestling knowledge isn’t a prerequisite to understand or even enjoy Heels. The show is a compelling family drama about two brothers just trying to keep the family business — the Duffy Wrestling League — afloat while navigating a strained relationship in the wake of their father’s death. Because of its wrestling setting, industry terms are sprinkled throughout but quickly explained, and the audience is never left in the dark about what any of those strange phrases (i.e., kayfabe) mean.

Arrow‘s Stephen Amell leads the cast as Jack Spade, a loving father and husband who takes up the role of the heel, or villain, in front of the DWL’s live crowds. Amell, of course, slides into the role naturally — his previous wrestling experience comes in handy here — and he really shines in the show’s stunning in-ring segments. 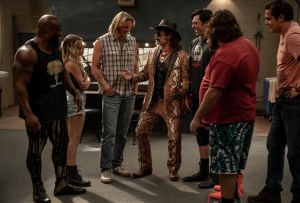 Meanwhile, Jack’s younger brother Ace Spade (Vikings’ Alexander Ludwig) is the face, or good guy, despite his drunken, messy behind-the-scenes antics. You’d never tell that Ludwig never wrestled before; he oozes charisma and natural athleticism as the cavalier small-town star with big league dreams. Amell and Ludwig trained with legendary wrestler Chavo Guerrero Jr. (stunt coordinator for Netflix’s GLOW and NBC’s Young Rock) along with local indie wrestlers, and it’s fun to see them in action throughout the series.

Heels is a beautifully shot and well-written love letter to independent wrestling, elevated by an ultra-talented acting ensemble. Chris Bauer (True Blood, The Deuce) is a scene stealer as “Wild Bill” Hancock, a flamboyant Ric Flair/Jake “The Snake” Roberts type who’s grappling with the unsettling reality that his best wrestling days are far behind him. Shoutout to costume designer Laura Cunningham Bauer for dressing Bauer in flashy matching suits, like a bright snakeskin ensemble you’ll wish you had in your closet.

Plus, Alison Luff is a refreshing presence as Jack’s supportive but assertive wife Staci Spade; Mary McCormack is funny and sardonic as Jack’s business partner Willie; O’Malley is a fun rival as Gully, the hedonistic head of the DWL’s big league rival promotion Florida Wrestling Dystopia; and Kelli Berglund is an unsung hero as Crystal, Ace’s valet and an aspiring wrestler with a brilliant creative mind. I’m ashamed to admit that it took me a whole five minutes to recognize real-life wrestler CM Punk, who is unforgettable in his brief appearance as local wrestling legend Ricky Rabies. (Bonnie Somerville is also a delight as Ricky’s valet Vicky Rabies!)

Some of my favorite scenes are with Robby Ramos, Allen Maldonado and James Harrison, who are criminally underused as in-ring vets Diego, Rooster and Apocalypse. They offer a glimpse at the locker room camaraderie that exists within the wrestling world, and in their limited screen time, appear to be way more interesting and complex personalities than the show lets on. One of the more frustrating aspects of the show is the way in which it handles these BIPOC characters, particularly Rooster and how his valid concerns about how Jack books him for matches are continually brushed off. Rooster is portrayed as arrogant and “making it about race,” despite all signs pointing to some form of unconscious bias. The show squanders a big opportunity to have a nuanced conversation about this pressing issue within the wrestling community and instead focuses on making Jack seem like the good guy in that scenario. 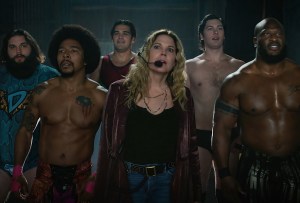 With that said, Heels is an entertaining and worthwhile watch for wrestling fans and non-wrestling fans alike. While the show’s in-ring segments are pretty cool, the show’s biggest sell is the prickly but tight-knit relationship between the Spade brothers, who have very different dreams but remain entwined because of the family business.

Fair warning to wrestling fans: Waldron does take some artistic liberties with his in-ring segments, especially with a big twist you’ll see later in the season, which makes for great drama even if it isn’t completely accurate, and those who are used to seeing their favorites defy gravity with mind-blowing aerial assaults may be disappointed with the more simplistic moves offered in the series. Still, the show gets to the heart of wrestling in all of its backbreaking glory while delivering a classic sibling rivalry that serves as the show’s beating heart.